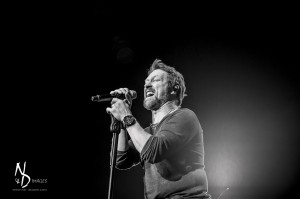 Craig Morgan, along with Uncle Kracker made a pass through New England at the Verizon Wireless Arena at the end of 2013. While having never seen any of the acts on the bill, I was looking forward to what the show was to bring. I can say that I was very pleased with the results. 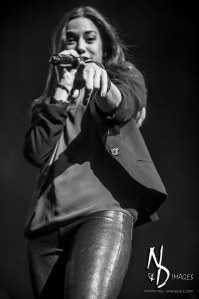 A newer acts to the county scene, Jana Kramer made a strong first impression. While many of her songs on her self titled debut are a bit more laid back, her live show packs a punch. Along with her strong vocals and a tight band, she brings life to her songs. Kramer even added a few familiar songs to her set such as “Simple Man” by Lynyrd Skynyrd leading into her second single off her album “Whiskey.” She also covered Jo Dee Messina’s “Bye Bye.”

Well known performer, Uncle Kracker was next up to entertain the

crowd. Kracker has made a huge step in the crossover market of rock, country and hip-hop and was a fitting act for this show. His stage set was nothing fancy, just him and his band and I feel that it brought more attention to the performance, and a good one at that. Playing all of his hits, such as “”Good To Be Me”, “Smile”, and the very well known duet with Kenny Chesney  “When the Sun Goes Down”. No, Chesney was not at the show.

Kicking off his set with “International Harvester”, Craig Morgan wowed the crowd with his action packed performance. While Morgan might seem like a newer country artist to many, his self titled debut album was released in May of 2000. With a back catalog of thirteen years, Morgan had plenty of songs to play all night, and I wished he had. Craig has polished and fine tuned himself over these years and it shows. Songs such as “This Ole Boy”, “Little Bit of Life” and huge hits like “Bonfire” and Redneck Yacht Club” filled the arena and the ears of the crowd.

There are so many great artists out there today, it is nearly impossible to listen to each and everyone of them, but I can assure you I will be listening and following Craig Morgan much more than I have been over the last few years. I am looking forward to catching Morgan again real soon.

How do throw a 20th birthday party in Boston? Invite Flogging Molly to the party. The House of Blues in Boston celebrated their 20th anniversary on Friday Feb 1st as they welcomed Flogging Molly along with Skinny Lister and show opener Dave Hause. Haling from London, Skinny Lister got the crowd of beer drinking party goers dancing and clapping along to their sea shanty styling of tunes. Skinny Lister, with their strong vocal abilities and amazing musicianship seemed to be a perfect fit to share the stage with Flogging Molly.

Flogging Molly is a true testament to seeing a band live in concert. They give you 100% from the first to the last note and are one of the most energetic band you will see hit the stage. With songs such as “Drunken Lullabies” and “TobaccoIsland”, the audience was singing over the volume of the band as they played. Seeing the interaction on stage of the band members and their interaction with the crowd, you can tell that the band mates truly love what they do.

This Day In Music History

1970, Aerosmith performed their first ever gig when they played at Nipmuc Regional High School in Mendon, Massachusetts. Sometimes referred to as "The Bad Boys from Boston", Aerosmith became the best-selling American rock band of all time, having sold more than 150 million albums worldwide. They also hold the record for the most gold and multi-platinum albums by an American group.

Audio Still Magazine On You Tube